July is Parks Make Life Better month and what a better way to kick start our series than with an outdoor recreation grand opening of a newly renovated multi-purpose field!

Like many facilities at the edge of San Francisco Bay, North Field is a repurposed landfill site. The 177,500 sf facility was capped over 30 years ago and sand-based ballfields were built on top. At the time sand-based fields were considered ‘State of the Art’ due to the big benefit of the speed at which they dried out after rains, allowing use to be maximized. The downside was that a lot more water had to be applied to keep the turf alive as soil moisture levels would rapidly fall below turf sustaining levels, particularly on windy and sunny days. By 2012 the city had determined that the field should be converted to synthetic and looked to CALA for guidance. CALA helped with the extensive programming process to determine the best combination of baseball and soccer uses and then hired CALA again in 2018 to complete construction documents. 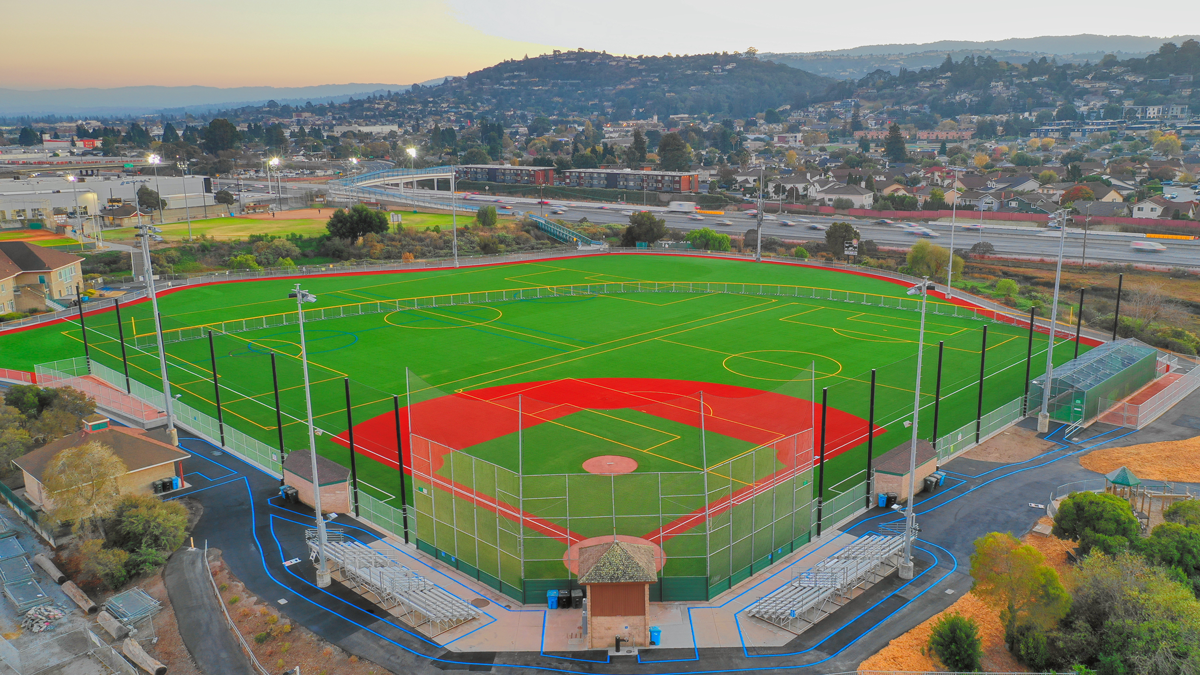 The site is unique in many ways. The landfill cap is not planar and building a perfectly planar field, as is the custom for synthetic turf fields, could not have been achieved without either disturbing the cap or constructing low walls all around the perimeter to ‘catch grade’. Neither course was considered viable and so the field was built in such a manner that it largely conforms to the subgrade, successfully imitating the form of a natural turf field.

North Field now accommodates side by side U-19 and U-12 soccer fields with a baseball field overlay. Significant access upgrades were incorporated including: converting the dugouts from sunken to flush with access improvements to the parking lot and sidewalk in the public ROW; Access provisions to the restroom and concession building; lights were upgraded to LEDs; and, the existing foul ball netting was supplemented to further aid in foul ball management. As we come out of Covid, this facility has been extremely well received by the community for the opportunity it provides to once again engage in favorite pastimes.